The day started out on the farm but this was cut short with news of the Richard’s Pipit having been seen again at Pirate’s Cove at Wyke Regis. Thanks John Wall! I did not even take breath before I was on the road to Wyke with the intention of adding this species to my Dorset bird tally.

On arrival I bumped into a few regular hardcore birders which was an encouraging sign. Simon said the bird had flown in the direction I was walking from. The search began and a couple of hours passed without sight or sound of the Pipit! Uh oh! 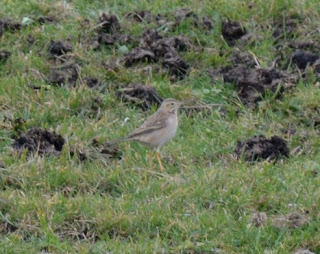 Time moved on into the afternoon and I was losing hope of seeing the bird. Some folk had already given up the task and gone on to other things. I was seriously thinking of going back to the farm when I noticed some activity at the bottom of the hill. I joined the guys and there the Pipit was in the horse field near the top of the hill! It flew a couple of times calling but always returned to the field.

Some pictures and messages later and this pale bulky long legged pipit had been bagged giving plenty of time to watch on as it fed in the field. The morale to the story is if you are thinking of leaving a twitch stay for five minutes more!

Kojak
My ornithological adventure started in Tobago in 1999 during a holiday. I returned home and my passion for bird watching grew. It also coincided with retiring from playing soccer. I retired from my career in 2016 and lived and worked at Laguna Blanca Reserve in Paraguay with Para La Tierra. This was the foundation to a change to a scientific approach to studying birds. I have since attained a Diploma in Ornithology and attended BTO Bird Surveying Techniques and Nest Recording courses. I have spent a season raptor counting with Batumi Raptor Count in the Republic of Georgia Europe and spent time with Cano Palma in Costa Rica. My home county is now Dorset having spent my former years in Greater London / Surrey where I learn't my fieldcraft at Beddington Farm. I have travelled extensively in my quest for improving my knowledge of birds. Countries visited include:- Australia, New Zealand, Southern Africa, America, Colombia, Costa Rica, Europe.