Walton on Thames and Epsom and Walton Downs - Regular Caspo and some Viz Mig!

Another bumper day was had at Queen Mother Reservoir with Tony Beasley and the Hersham Ringing Group. I added another net tick Coal Tit to my short list and then popped in to the Elmbridge Xcel Centre on the way back to Epsom Downs to bag the adult Caspian Gull. 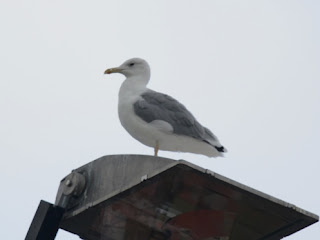 I guess there was no surprise when the bird was sat up on the floodlight pylon admiring the elevated view of the area. This was probably the easiest Caspo I had seen in England anyway! I had a quick look around and then made my way back to Epsom Downs for Geese watch.


The geese appeared fairly late on and flew in in short waves of birds. If you put aside that the majority are Canada Geese it is still a sight to see as “V” formations appear over the trees then wheeling round to land on the high ground of the field. Numbers were also slightly up with 303 plus a Greylag and a couple of hybrids! They all fly in from the general direction on Langley Vale. I wonder where they spend the day?


As the cloud rolled in hirundines, Swallow 6, and Sand Martin 66 (one flock) along with Starling 72 and Herring Gull 95 passed SW over the tree line. The Jackdaw roost had over 100 birds in attendance just before dusk.
Posted by Kojak at 14:51