I took a short jaunt to Maiden Castle this morning to see or hear if the Quail was still singing in the area of the main car-park. No joy on that front so I stopped off at the Water Meadows to see if there was any activity. 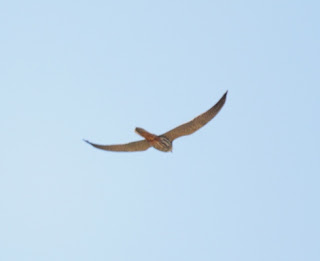 There was with reasonable numbers of hirundines bombing about above the pools and fields. Just after 11am a Hobby entered stage left causing a commotion amongst the House Martins. The bird did not stick around for long before it made its way SE. The picture above shows the overall slim build, rusty vent and dark striping through the breast.

It wasn’t long after that the Red Kite made the first of two appearances over the meadows. I have had so many sightings this year I have become almost blaze about their presence. There is at least one local bird as well as some migrating birds. More details here.

A mixed morning with a note to self to cover some of the fields in the area listening for Quail, The Hobby is another new species for my Water Meadows tally but I expect more to pass through particularly on good hirundine days!

Kojak
My ornithological adventure started in Tobago in 1999 during a holiday. I returned home and my passion for bird watching grew. It also coincided with retiring from playing soccer. I retired from my career in 2016 and lived and worked at Laguna Blanca Reserve in Paraguay with Para La Tierra. This was the foundation to a change to a scientific approach to studying birds. I have since attained a Diploma in Ornithology and attended BTO Bird Surveying Techniques and Nest Recording courses. I have spent a season raptor counting with Batumi Raptor Count in the Republic of Georgia Europe and spent time with Cano Palma in Costa Rica. My home county is now Dorset having spent my former years in Greater London / Surrey where I learn't my fieldcraft at Beddington Farm. I have travelled extensively in my quest for improving my knowledge of birds. Countries visited include:- Australia, New Zealand, Southern Africa, America, Colombia, Costa Rica, Europe.