The nets were set bright and early this morning but I don’t think anyone thought that a Beddington Farm first would occur mid morning. Mike Netherwood who is the A permit holder and has been ringing on the Farm for many years. He leads the group of Dodge and Frank who await their C permit and Devilbirder who is a C permit holder. I am the new kid on the block with a T permit.

The weather forecast indicated that the morning would be overcast but the sun had other ideas and was busy illuminating nets that were set. We had a few re-trapped and only a couple of new birds to process.

Plan B was put into action resulting in the smaller nets being moved down to the edge of the North Lake in a “Z” pattern. We had attempted to catch a Dartford Warbler that had been frequenting the scrub on the mound and lake edge but it had eluded the nets thus far. 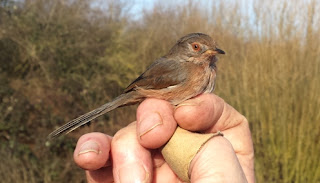 This morning changed that with a female bird being caught in the net and Dodge was top of the list to process the bird. It transpired that this was the first of this species to be ringed on The Farm and all of us were excited to receive the great news! The bird was duly processed a few pictures taken and it was released back into a scrubby area.

Homework for this week was ageing Chiffchaff which is not an easy matter!! Roll on the next session!
Posted by Kojak at 13:38