Today Pete Alfrey and I teamed up with birding and botanical guru Steve Gale. Our quarry was the large numbers of Hawfinch that are frequenting the Juniper Top area of the Surrey Downs. Steve has been walking this area for a while reporting large numbers of birds in the area. It took around an hour to find the main flock of birds but there was plenty of overhead activity during our walk.


Access to the area the birds were in today was via Whitecliffe Carpark and a steep climb up the hill through the gate continuing up the hill taking the first path on the left along a muddy track. From there you walk along the track until a small post with a yellow marker. Take the upper path until the path runs parallel to an area of grassland running between the hills. When you reach the two horse jumps descend to the field edge, listen and scan the trees for the flocks of Hawfinch. 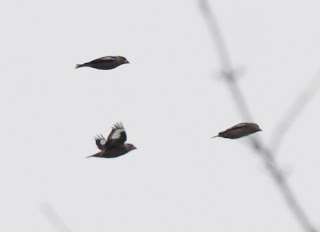 Counts were taken as flocks of Hawfinch flew into congregating in the trees on the opposite side of the “valley”. A count of 260 birds was truly an amazing site one of which I have not experienced on this scale in my home county before. The birds poured into this area before wheeling above our heads in a loose ball.

If you have not seen Hawfinch in these numbers before it is well worth the visit. But be aware that the flocks are very mobile and with so much suitable habitat in the area it could take a while before you locate a significant flock. It also begs the question as to the true number of birds that are present in the area?


Other species noted along the way were Marsh Tit, Bullfinch and several mixed tit flocks with the odd pheasant at ground level. We headed back to the mobile observatory (Pete’s campervan) just in time to avoid the rain.


Thanks Steve for guiding us into the area which could easily be missed if unfamiliar with the terrain. Check out his blog http://northdownsandbeyond.blogspot.co.uk/ and Pete’s blog http://peteralfreybirdingnotebook.blogspot.co.uk/ for more insight into this amazing spectacle!
Posted by Kojak at 07:41