Today I joined forces with Peter Alfrey for an excursion into Kent to visit Oare Marsh and Isle of Sheppey. High tide at Oare was at around mid-day therefore the start to the day was at a reasonable hour. he water levels on the marsh seemed high with the incoming shorebirds huddling on exposed areas of mud that were reasonably close to the road that leads to Visitor Centre. 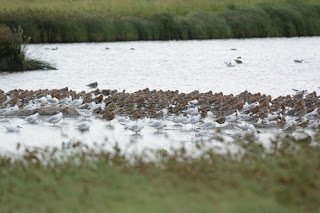 Many of the interesting migrants only offered scope views with a couple of juvenile Garganey see Pete’s blog for pictures. The Bonepartes Gull was also present with  Med and Common Gull. The shorebirds were represented by Curlew Sandpiper, Ruff, Knot, Green Sand, Dunlin, Turnstone, Redshank, Oystercatcher, Lapwing, Avocet, and Black Tailed Godwit.


At high tide we stopped for lunch and then tackled Shellness on the Isle of Sheppey to catch the shorebirds on a falling tide. Terns were well represented by Little, Common and Sandwich Tern that had joined the Oystercatcher to shelter from the wind that with the heat haze was making shorebird identification somewhat tricky! Curlew, Whimbrel, Bar Tailed Godwit and Sanderling were added to the day list from this side of The Swale.


The rest of the afternoon was spent at Capel Fleet where a Corn Bunting broke into song from a nearby telegraph wire and a few passerines made it onto the day list. 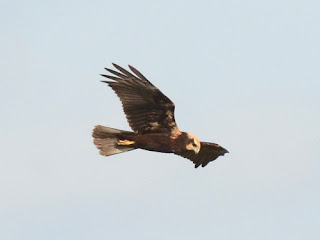 The final stop of the day was at Elmley where several Marsh Harrier including a juvenile (note cream cap and fresh plumage with no signs of wear or moult in the wings or tail feathers). 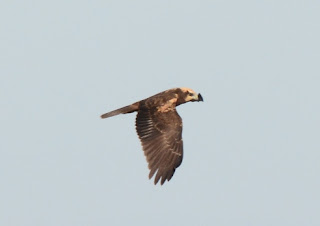 Eighty species were recorded during the day sadly many regular passerines were missing probably due to the windy conditions! Tomorrow I will be banding at Queen Mother Reservoir!
Posted by Kojak at 15:35