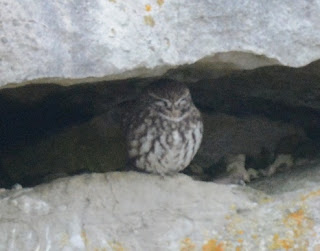 I was up and out at stupid o clock this morning driving down to Portland to meet Pete Alfrey who was camping at the Pulpit Inn. I arrived before dawn and the silence was broken by the Little Owl which was singing in the Observatory Quarry. I think the bird had the right idea as it was sleeping when we caught up with it later on in the day!

Once dawn had arrived we set off to the Ope quarry to process the contents of Pete’s moth trap. There were around 60 moths inside which was considered a reasonable haul! We visit the Observatory and spoke with Martin who kindly set aside his haul (500+/- moths) from the garden for Pete to look through! See Pete's blog for more details!

The skies were busier than the land today with obvious Viz-Mig of hirundines, Goldfinch, Meadow Pipits, Linnets, Chaffinch and a Siskin. 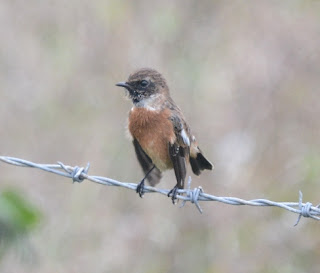 Visits to The Hump, Barleycrates Lane, and Reap Lane where Chiffchaff was numerous across all areas. A field at Reap Lane held a good number of Wheatear! A walk down the West Coast gave good views of low flying Swallow and House Martin. Stonechat were scattered along the scrubby areas.

The addition of Brett to the rarity hunters after lunch did not result in any additions on the migrant front but we had a pleasant walk around Culverwell and the top fields.

The day finished off with Pete and I popping down to Ferrybridge to watch the incoming tide. Bar-tailed Godwit, Curlew, Ringed Plover, Dunlin, Sanderling, Sandwich Tern and stacks of Med Gulls were seen on both sides of the Harbour. Fish and chips and a drink in The Pulpit saw the pals reflect of the days efforts!

Kojak
My ornithological adventure started in Tobago in 1999 during a holiday. I returned home and my passion for bird watching grew. It also coincided with retiring from playing soccer. I then retired from my career in 2016 where I lived and worked in Paraguay with Para La Tierra. This was the foundation to a change to a scientific approach to studying birds. I have since attained a Diploma in Ornithology and attended BTO Bird Surveying Techniques and Nest Recording courses. My home county is now Dorset having spent my former years in Greater London / Surrey where I learn't my fieldcraft at Beddington Farm. I have travelled extensively in my quest for improving my knowledge of my feathered friends. Countries visited include:- Southern Africa, America, Colombia, Costa Rica, Europe. I have recently spent a season raptor counting with Batumi Raptor Count in the Republic of Georgia Europe. My greatest adventure to Singapore, Australia and New Zealand is complete. A new challenge is underway in a bird friendly county!